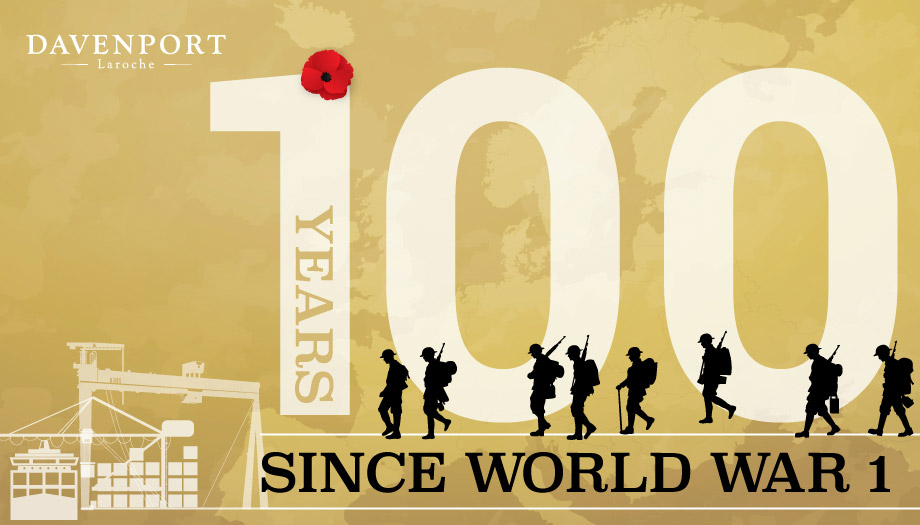 The year 2018 is a year of great international significance as it marks the one hundredth anniversary of the end of the First World War. As we reflect and contemplate the tragic events that took place during WW1, we must also look to the future and how we proceed to conduct international relations during peace time.

Those who survived the War would likely not recognise the world we live in today, notably the way we conduct international business and trade has changed drastically. The end of the war allowed for the introduction of global trade agreements between nations to once again take place.  Due to numerous factors, the traditional scale of cross-border trading shifted and began to operate on an increasingly bigger platform. In particular, international shipping was to benefit enormously with particular reference to the factors mentioned below.

As post war nations slowly regained the confidence to trade, the demand for faster access to the worlds trading ports led to a new and improved canal system that introduced shorter sea routes for trade around the globe. Examples of major canals that have been introduced post war include the Welland Canal, Rhine-Main-Danube Canal and the St Lawrence Seaway. The Rhine-Main-Danube Canal is now a major marine gateway that links the North Sea to the Black Sea via the Atlantic Ocean. With an increased global trade system, shipping vessels began to grow bigger in order to transport more cargo.

This had a ripple effect, creating a need for the expansion of older canals, such as the Panama Canal.  The introduction of expanded canals shortened journey times, paved the way for further canal expansions and increased further trading opportunities.

The Increased Collaboration between Trading Nations

After the war, international trade was obstructed by strict trade restrictions and most countries concentrated on protecting home industries through a policy of isolationism. In response to this, the General Agreement on Tariffs and Trade (GATT) was signed by 23 nations in 1948 to rectify the situation. This was the first worldwide multilateral free trade agreement with the purpose to increase international trade by regulating and reducing tariffs. The GATT also acted as a forum to resolve trade disputes and soon evolved into the World Trade Organization (WT0).

They have since introduced three more international trade agreements. These include the General Agreement on Trade in Services (GATS), the agreement on Trade-Related Intellectual Property Rights (TRIPS) and Trade-Related Investment (TRIMS). The Organization for Economic Co-operation and Development (OECD) was also founded to stimulate economic progress and world trade. These trade agreements and organisations built the foundation for free trading zones as well as a safer trading environment.

The Evolution of Sea Ports

Initially, Sea ports were only conceived to transport goods between land and sea and vice versa. With the progressing economy, made possible by the increase of international trading, sea ports started to grow in terms of their functionality and surrounding ecosystem. The advancement of shipping technology has also brought rudimentary changes to the development of ports.

Currently, at its fourth generation, sea ports have gained value by incorporating extensive logistical functions, telecommunication systems and intermodal terminals. Sea ports are now not only seen as transportation hubs, but also are the centre of industrial activity, commercial activity and global economic growth.

The progress of the industry was intensified by the invention of the shipping container. Originally evolved from Stanislaw Rodowicz’s first drawings of his container system in 1919, it became the CONEX box system developed by the US army in 1952. However, the first standardized shipping container was invented and patented by Malcolm Mc Lean in 1956. His version of the container system involves a twist lock mechanism on top of the four corners, allowing an easy lifting movement for cranes to load and unload containers.

This new standard for shipping containers greatly aided the evolution of the global shipping trade and allowed shipping vessels to increase in size considerably since they were first introduced.

With the adoption of enhanced shipping technologies, the overall efficiency of the global shipping trade became extremely economical. The introduction of the vessel tracking system, Automatic Identification System (AIS) and the Global Positioning System (GPS) was a key feature in promoting a risk-free trading system.  Both these systems where, and still are, used to provide real-time information of vessel movements and location.

It is important to remember that none of these advancements in the global shipping trade would be possible without the continued relationship between nations around the world.

Get in touch with Davenport and we will show you how owning containers will give you access to the world’s leading hard asset investment.