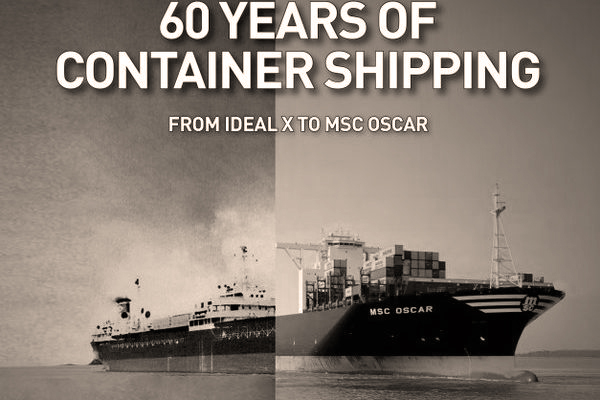 WHEN a small group of men met in Hong Kong last month, there would have been plenty to celebrate. For they head up an industry that really has changed the world.

Yet it is unlikely that any would have paid much attention to this success story, given the current plight of the companies they lead and the need to focus all their efforts on costs during one of the most difficult periods their industry has experienced.

Members of the Box Club, which represents the chairmen and chief executives of the world’s top container lines, get together twice a year to exchange views on matters of mutual interest — with the exception, of course, of commercial matters such as freight rates, which they are banned from discussing on antitrust grounds.

Whether they added another item to the agenda of this strictly private meeting is unknown, but they would have had good reason to raise a toast to the 60th anniversary of containerisation.

April 26, 1956, is widely regarded as a key date in the history of shipping, when standardised containers were first used to transport cargo by sea.

The converted tanker Ideal-X sailed from Newark, New Jersey to Houston, Texas, carrying 58 containers on its decks, along with petroleum in its hold.

The idea of putting cargo into containers — in this case ones that were 35 ft long — was the brainchild of trucking magnate Malcom McLean, who calculated that loading a medium-sized ship the conventional way cost $5.83 a ton, compared with less than $0.16 a ton on Ideal X.

Mr McLean went on to found Sea-Land Services, for many years the trailblazer as containerisation opened up new markets and gradually connected just about every corner of the world to the global economy.

Like so many of those early pioneers of container shipping, mostly from the US, Sea-Land no longer exists, except as a small regional brand.

Today — and perhaps somewhat surprisingly — it is European lines that dominate the box trades.

Top of the pile is Maersk Line, which was a relative latecomer to containerisation but nevertheless has a direct link back to that first momentous voyage.

For Maersk has reached its number one spot through a series of acquisitions, including Sea-Land back in 1999, followed later by P&O Nedlloyd, itself the product of a merger between two of the biggest names in container shipping.

Over the years, Maersk has also led the way in ship development, with vessels of up to 20,000 teu now in service, an almost unimaginable size for those who first thought of packing cargo into metal boxes.

But that is perhaps another remarkable fact about container shipping. One of the very few global standards is an imperial measure, a legacy of containerisation’s roots in the US, one of the few countries in the world not have gone metric.

But it was a former editor of Containerisation International, Richard Gibney, who coined the globally-recognised acronym ‘teu’ — standing for ‘twenty foot equivalent units’. No-one talks about deadweight when measuring the size of a containership. It is the teu capacity that matters.

And it is that competitive spirit that has brought so much prosperity around the world.  Antitrust authorities may worry about collusion from time to time and shippers frequently complain about industry practices, but evidence of harmful behaviour is hardly compelling.

Instead, consumers now take it for granted that they can easily afford laptops, smart phones, household appliances and full wardrobes of clothes and footwear. Yet most of what we accept as the norm today would never have been possible without container shipping and its relentless drive to find economies of scale in order to squeeze out costs and, by default, bring down high street prices.

So members of the Box Club, currently chaired by Maersk Line chief executive Søren Skou, have every right to feel proud about what their industry has achieved over the past 60 years. Whether they give it a moment’s thought in such turbulent times is another matter.